Oil pulling is an ancient technique for cleansing your mouth and taking care of your overall oral cavity health. Its main role is to clean and detoxify the teeth which later brings to other positive effects such as healthy gums and fresh breath. 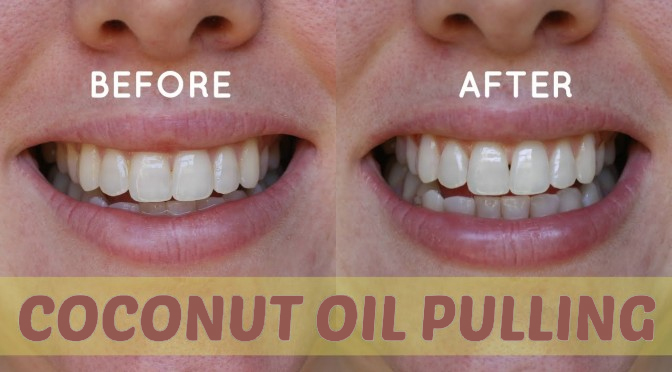 All that you need for this procedure are 1-2 spoons of oil. And all that you have to do is swish the oil in your mouth for about 20 minutes. After the procedure, you should brush your teeth thoroughly. If you have discomfort you can start with 5 minutes treatments and work toward the 20 minute goal.

Streptococcus Mutans is one of the bacteria that cause tooth decay and gum ailment. The bacteria in the mouth make a “biofilm” on the teeth in which they thrive. That is what we call “plaque”. It is proved that oil pulling, especially with coconut oil diminishes this bacteria, as well as other harmful microorganisms that live in your mouth.

Oil pulling works in a very simple way. When you swish the oil around your mouth and between the teeth, microorganisms “get trapped” and dissolve in the oil.

Which oil to use?

Many cultures have used sunflower or sesame oil, however, coconut oil is considered to give better results. Coconut oil is very effective against Streptococcus Mutans and also rich with medium chain triglycerides and lauric acid.

Reduces bacteria population in your mouth

In a study from 2008, 20 people practiced oil pulling with sesame oil. In less than two weeks the number of Streptococcus Mutans (the bacteria responsible for caries) had been significantly reduced.

The gums inflammation is the reason for gingivitis. It occurs when the immune system attacks the bacteria in the plaque. According to the studies, oil pulling is as efficient as chlorhexidine toothpaste against gingivitis.

The condition is also called halitosis and it is caused by the smell of the chemical compounds and gases that bacteria produce in the mouth. By reducing the count of bacteria, this discomforting and unpleasant problem will be solved.

If you use this technique for at least ten days, you will definitely notice improvements. Your breath will be fresh and your teeth will be brighter and shiny.